May 25, 2021– Framingham, MA – Wise Wizard Games LLC, the makers ofStar Realms,announced today that they have launched Robot QuestArena, a new deckbuilding game, on Kickstarter. Wise Wizard Games has raised over $4.5M on Kickstarter to date, and they are super excited to offer their first game with miniatures. Robot Quest Arena is a deckbuilding game of robot battles! Do you have what it takes to be the best Robot Tech in the world? Control your battlebot miniature with the skills of your driver and the cards in your deck! Acquire powerful new upgrades for your bot. Destroyed bots respawn each round, so you’re never out of the action! 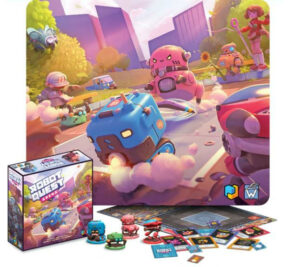 Rob Dougherty, CEO of WWG, said “This game is fantastic! It combines the awesome deckbuilding fun of Star Realms with skirmish stylebattles using beautiful fully painted robot miniatures. I can’t wait to get it into the hands of gamers around the world!”

“The Wise Wizard Games team has done an amazing job with the development of the game and the components all look awesome. It has been so thrilling to see the Robot Quest world come to life!” said Paul Waite, designer of Robot Quest Arena from Perfect Day Games.

Wise Wizard Games LLC was founded in 2013 by two Magic:The Gathering Hall of Famersthat wanted to make awesome strategy games that were affordable for everyone. Their first game,Star Realms, a space combat deckbuilding game,exploded in popularity and won 7 Game of the Year awards. For more information, visit wisewizardgames.com, like our Facebook page, and follow Wise Wizard Games on Twitter @wwizardgames. Watch Wizard Weekly Live every Tuesday at 11 am EST on our Facebook Page and on our YouTube Channel. You can also find us on discord here.

Perfect Day was founded in 2019, lead by CEO Josh Ayala, and a team that spun out of King (CandyCrush) Seattle.

Perfect Day Games aims to complete a perfect day for their players by providing a rich, fun, and fair world in which people of all ages can play together. Robot Quest is the first IP generated by the team, with mobile first digital games in progress and expected to launch in 2022. You can find more information at https://www.perfectday.games/ and follow along with our journey on Facebook, Twitter, and LinkedIn.