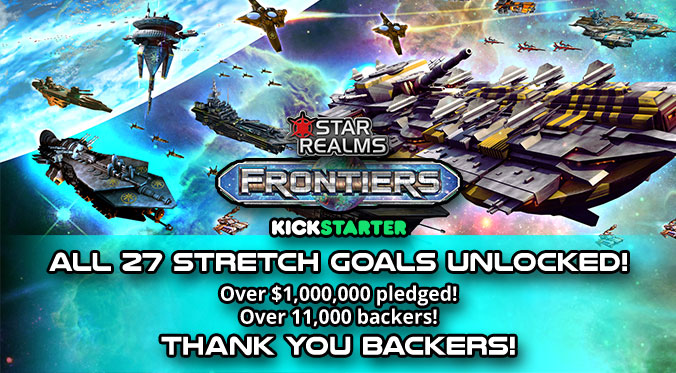 Star Realms Deckbuilding Game Kickstarter has Reached $1M in Funding.
All 27 Stretch Goals Have Been Unlocked by Over 11, 000 Backers.

August 10, 2017 – Framingham, MA – Wise Wizard Games LLC, the company created by Magic: The Gathering Hall of Famers Darwin Kastle and Rob Dougherty, today announced that the Star Realms Frontiers Kickstarter has reached $1M in funding, far exceeding its initial goal of $100,000. Of the 365,780 campaigns created on Kickstarter to-date, only 248 have surpassed $1 million in funding, placing Star Realms Frontiers in the top 0.1% of the crowd-funding sites’ initiatives.

According to the list of the Top 10 Funded Kickstarter Boardgame Projects on BoardGameGeek, Star Realms Frontiers will move into 8th place in its category. The Star Realms Kickstarter ends today, August 10, 2017 at 10 pm EST.

Star Realms is an explosively-popular Deckbuilding Game that combines the fun of a deckbuilding game with the interactivity of trading card game-style combat. Star Realms has won 7 Game of the Year awards.

“Our fans helped us launch our company and Star Realms on Kickstarter four years ago, and now they have come through for us again in helping us attain this amazing million-dollar Kickstarter achievement. We listened to our backers as the campaign proceeded, and added the Universal Storage Box, lots of solo and cooperative play, and many add-ons that our fans wanted,” said Rob Dougherty, CEO of Wise Wizard Games.

Darwin Kastle, Designer of Star Realms and co-founder of Wise Wizard Games added, “Our fans are going to love the new Command Decks. It takes Star Realms game play to a new level when each player starts with a different custom deck!”

The 27 Unlocked Stretch Goals for the Star Realms Frontiers Kickstarter include:

Wise Wizard Games LLC was founded in 2013 by a team of seasoned professional gamers dedicated to creating games that are affordable and fun for everyone. Their first game, Star Realms, a space combat deckbuilding game, exploded in popularity and has won 7 Game of the Year awards. Their games are known for being easy to learn while also having enough strategic depth for even the most advanced gamers. Wise Wizard Games hosts the Wise Wizard Games Fair each year, featuring the $100,000 Epic World Championship.

Star Realms is a fast-paced deckbuilding card game of outer space combat. It combines the fun of a deckbuilding game with the interactivity of Trading Card Game style combat. As you play, you make use of Trade to acquire new Ships and Bases from the cards being turned face up in the Trade Row from the Trade Deck. You use the Ships and Bases you acquire to either generate more Trade or to generate Combat to attack your opponent and their bases. When you reduce your opponent’s score (called Authority) to zero, you win! The game is for 2 to 4 players, takes 20-30 minutes to play, and is for ages 12 and up.

Kickstarter is the world’s largest funding platform for creative projects. Kickstarter is full of projects, big and small, that are brought to life through the direct support of regular people. Since its launch in 2009, more than 13 million people have pledged over $3.2 billion, funding more than 129,000 creative projects. People who support these projects through funding do not profit financially, but are instead offered non-monetary rewards to thank them for being a supporter.