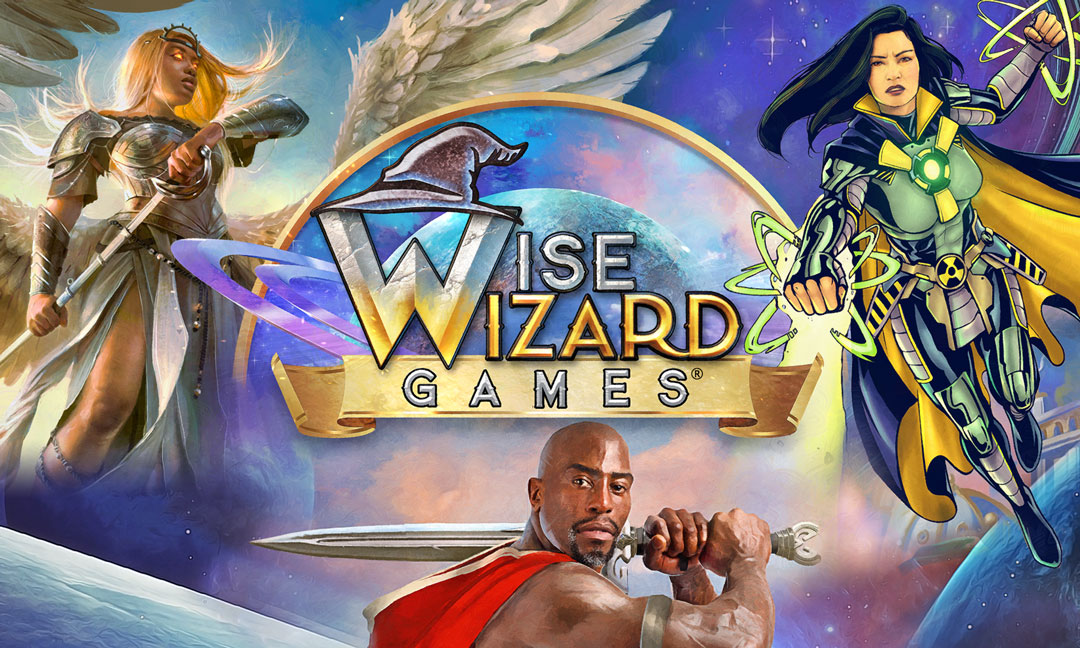 March 15, 2021– Framingham, MA – White Wizard Games LLC, the makers of Star Realms, announced today that they have changed the company name to Wise Wizard Games. As the company continues to expand, they want to have a name that best represents their vision and their community. The company has raised over $4.5M on Kickstarter, the Star Realms digital app has been downloaded over 1M times, and WWG had over 20% growth in revenues in 2020. The company has plans for continued growth, including a new arena strategy game designed by Richard Garfield. Coinciding with this renaming, Wise Wizard Games launched an updated website (www.wisewizardgames.com) and social media channels. Any new reprints going forward will use the updated company name. The short abbreviation for the company name (WWG), all SKU numbers, and the WWG hat logo remain unchanged to make the transition as easy as possible for their channel partners.

Riders of Chaos: An audacious arena battle game designed by Richard Garfield. Choose your skilled warrior, select your unpredictable beast, and play with crazy combos as you battle in the arena with stunning miniatures in an immersive play experience.

Robot Quest Arena: A deckbuilding game of robot battles! Do you have what it takes to be the best Robot Tech in the world? Control your adorable battle bot miniature with the skills of your driver and the cards in your deck! Acquire powerful new upgrades for your bot. Destroyed bots respawn each round, so you’re never out of the action!

Hero Realms Dungeon of Thandar: An all new adventure deckbuilding game box set that includes everything you need to adventure through the Dungeon of Thandar as your party fights off evil bosses and minions, leveling up and gaining skills, treasure, and magical items as they go!

Star Realms Rise of Empire: Before Star Realms, there was war and decimation. Rise of Empire tells the origin story of the Star Empire. In this legacy-style game, players will battle each other for survival, and in the end will walk away with a fully playable Star Realms set that includes all-new factions!

“Our original company name was a throwback to Gandalf, the iconic fantasy character. Based on feedback from the community and our future plans to broaden our product line, we decided it was time for a change,” said Debbie Moynihan, COO of Wise Wizard Games.

“We love making games, and are looking forward to growing Wise Wizard Games with many awesome new titles. I am particularly excited to work with Richard Garfield!” said Rob Dougherty, CEO of Wise Wizard Games.

“We at Perfect Day are ecstatic to be working with Rob and the team over at Wise Wizard Games. Their responsiveness to their community is second to none, and it shows in the evolution of their brand. We can’t wait until the Wise Wizard community gets to experience the colorful and cute robot world of Robot Quest: Arena!” said Paul Waite, designer of Robot Quest from Perfect Day Games.

The company will be releasing follow-on announcements with more details for each of these games. For more information, visit wisewizardgames.com, like our Facebook page, and follow Wise Wizard Games on Twitter @wwizardgames. Watch Wizard Weekly Live every Tuesday at 11 am EST on our Facebook Page and on our YouTube Channel. You can also find us on discord here.

Wise Wizard Games LLC was founded in 2013 by two Magic: The Gathering Hall of Famers that wanted to make awesome strategy games that were affordable for everyone. Their first game, Star Realms, a space combat deckbuilding game, exploded in popularity and won 7 Game of the Year awards. Their games are known for being super easy to learn but also deep in strategy for even the most advanced gamers. wisewizardgames.com.